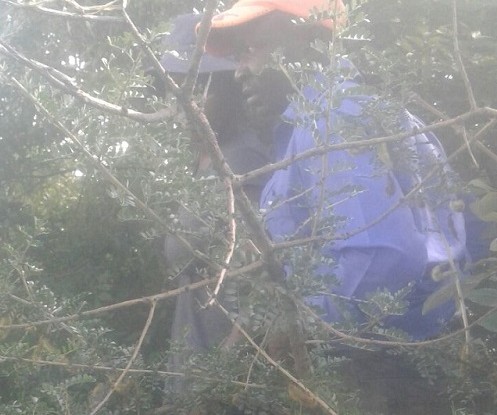 People might forget where they park their cars or where they live but never do they run out of ideas kana vane nyere yekuda kuisana.

Such was the case of two married lovers bent on cheating on their partners when they decided to take their act to a bush on the outskirts of Bulawayo on Solusi road.

The two walked from Nkulumane to their rendezvous but little did they know that they were being followed.

They didn’t even bother to check if the coast was clear of other people as they found a comfortable tree.

For some time, roughly five minutes they went about their “deed” thinking they were being watched.

They were to realise that there was a human set of eyes and an electronic gadget when the woman accidentally stepped on a thorn and she winced in pain.

When she was repositioning to re-engage with her sweating lover, she saw the news crew and panicked. “Please don’t beat us up,” she said.

Probably she had seen some video where people are beaten up by those that find them having s.ex in the bush.

“Delete the footage, I am married,” she added as the man nodded in agreement. “It’s our first time,” added the man.

In their negotiations, the woman added that she was in an abusive marriage and her lover was an “escape to bliss”.

The B-Metro crew left them to carry on but this reporter is not sure if they continued or not.